This past Wednesday, Digital Democracy attempted an experiment in direct diplomacy.  We brought together 75 people at NYU’s Interactive Telecommunications Program (ITP) for “In their own hands: Live video exchange with Haitian women 6 months after the earthquake.”  We were joined at ITP via skype by my project partner, DigiDem Co-Director, Emily Jacobi, our translator (and project partner from the Institute for Justice and Democracy in Haiti (IJDH), Blaine Bookey, and our three guests of honor, Malya, Eramithe and Dulud from KOFAVIV, one of the leading grassroots women’s organizations working to address violence against women in Haiti. They were speaking with us from the Bureau des Avocats Internationaux (BAI) offices, the human rights law organization that serves as a gathering place for poor and marginalized groups who the BAI represents, many of whom are women’s networks and coalitions fighting for their rights and protection. At the event, DigiDem also premiered its newest episode of DDTV, which highlighted the trip that Emily and I took to Haiti, during which time we met with Haitian women leaders and conducted photography trainings to empower women to raise awareness by documenting their lives and struggle. The episode is now online for viewing. 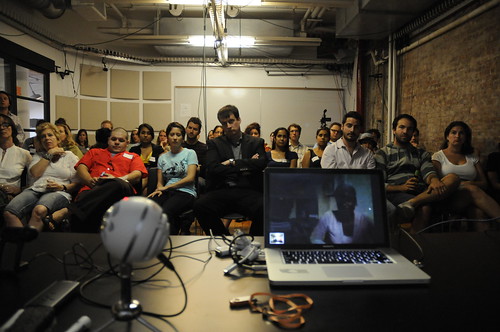 The event was a new format for DigiDem. While we have taught classes virtually and enabled staff meetings via videoconference, DigiDem has never held a live video exchange between activists working on the ground and activists here at home. What made last night different is that Skype enabled a real exchange between two groups that otherwise would not meet one another.  For us in New York, it was a privilege to hear directly from Haitian women themselves rather than about them through journalists or international organizations. For the women leaders, the simple fact of seeing a room full of people in NY, let alone communicating directly with them, was in itself a major feat – the women, who fight day and night and inhabit safe houses to stay protected, know they are supported.

In the wake of the January devastation, women have suffered a second crisis of personal security, both at home where they are faced with the inability to provide for increased dependents in their homes, or in displaced persons camps where they are under constant threat of attack. Despite their natural leadership abilities – evident to all who heard from them speak on Wednesday – they have little opportunity to share their perspective.  They don’t have websites, and access to email is inconsistent.  For donors abroad, this means they don’t exist, or are too inaccessible to reach.  Our goal, as in all our work, is to help increase access to the halls of power – literally as well as through citizen’s who will take on their cause – and provide them with the tools to have a voice. And at least last night, people were listening!

Haitian women and girls have suffered a great deal under Haitian law and structural discrimination, meaning that they are systematically more impoverished, less empowered, and more susceptible to violence; though there is no existing data on the levels of gender based violence, anecdotally, somewhere between 70-80% of Haitians having been victims of violence BEFORE the earthquake, and it has, in the words of Haitian women, become a crisis SINCE that time!  More than half of households are headed by women, which means more than half of the population depends on them for their livelihoods, safety, and security.  Yet while women hold the majority of responsibility in the informal sector, their formal representation in the economy, government, and diplomacy do not nearly reflect their importance in Haitian society.

Digital Democracy works to empower groups like the grassroots women of Haiti – people who have previously lacked power or public voice but can leverage new technologies to overcome historic exclusion.  Last night’s event proved just that. For the past several months, we have been working to provide tech support and strategy to Haitian women and their allies, the Institute for Justice and Democracy in Haiti, Madre, the New Media Advocacy Project, to name a few.  Haitian women are by and large a strong and powerful force.  But that character trait does not map onto their formal influence or power to decide the policies affecting their lives.  Until now.

We’d like to thank all of the people & organizations that helped make this event a success:

If you’d like to support KOFAVIV’s work, you can donate to IJDH here:http://ijdh.org/get-involved/donate, and earmark your donations for "KOFAVIV".

You can support Digital Democracy’s work in Haiti helping women to report gender-based violence, by visiting our site: http://digital-democracy.org/get-involved/

To purchase prints or pre-order a book of the photos taken by these women, please email us at info [at] digital-democracy.org

Thank you to all of who made this evening possible! We hope to do it again soon…