The power of new technologies has made a lot of headlines recently, but behind these new tools is a deeper story – the power of the people who wield 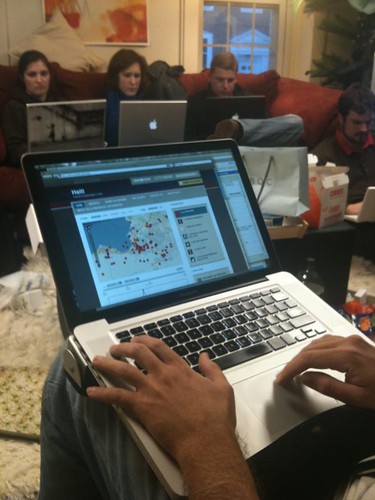 them. When it comes to open-source and particularly crowd-sourcing tools, those people are so often volunteers, and they are the true heroes of technological successes.

For me personally, the year 2010 has been quite emotional. The tragedy of the earthquake in Haiti has been juxtaposed by the outpouring of human support in response, and we’ve witnessed first-hand how technology can help ordinary people contribute to the emergency response. The folks at Crisis Commons have organized dozens of crisis camps where volunteers contributed to earthquake response, supporting tech tools, building apps and more. Thousands of volunteers contributed to the OpenStreetMap of Port-au-Prince, and hundreds of Haitian-Americans helped translate text messages from Kreyol to English once a Haitian shortcode was established.

Mark and I went to Boston to wait for the safe arrival of the Fletcher students working on Project Einstein: Haiti when the earthquake struck and had the privilege of being in Boston for the launch of the Fletcher Situation Room where we helped train some of the early volunteers who went on to train so many more. Their work has taken Ushahidi to a whole new level, creating new systems of organizing and verifying information. Their energy, devotion and level of coordination has been truly inspiring.  Volunteers from the Fletcher Ushahidi Situation Room have not only mapped over 3,500 incidents, they helped directly coordinate aid and save lives during search and rescue missions.

Most importantly, many of the volunteers around the world who used technology tools to support earthquake relief have done so in an attempt to respect local voices and needs a much as possible. As the Ushahidi-Haiti team works to hand over the platform to local actors, we are inspired by this new approach that demonstrates the power of putting technology in the hands of local actors. It’s an exciting example of global community to take these successes and apply the lessons as a curriculum for other contexts around the world.