From late April through the end of July, I was working and living in Western Thailand. This work enabled me to visit Mae La refugee camp quite often, during which I was able to take advantage of the time to pay several visits to the Leadership and Management Training Center (LMTC), a school inside Mae La. I went to follow up on Mark and Emily’s visit to LMTC last year when they led the students in a Project Einstein photo training.

Since last year’s PE session the students have been working on a lot of their own interesting projects. In addition to their normal coursework the students formed an organization of their own called the Dream of the Future Group. Last spring DFG visited communities of internally displaced people who have fled fighting between the Burmese government and armed Karen groups to distribute school supplies to children. They spoke with the teachers and community leaders struggling to provide education in the desperate conditions of the IDP camps and discussed ways they could support them. 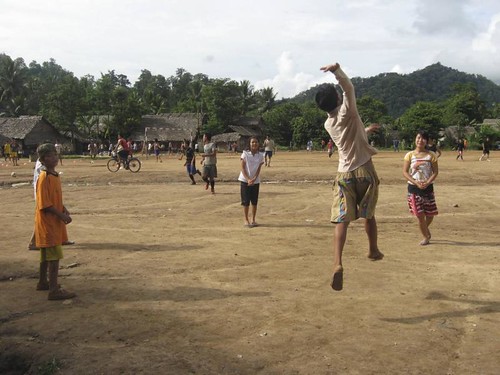 Not only did they successfully complete an extremely difficult (not to mention dangerous) project, DFG had the foresight and savvy to record their trip and put together a DVD showcasing their work through photographs and video. The borrowed equipment for filming and editing from friends, neighbors and relatives. And though I can tell you that this DVD exists – I held it in my hand – I sadly cannot tell you what it contains. On my trip to the school I discovered that my laptop’s CD/DVD drive does not work. Something I didn’t know since, in today’s world of YouTube and downloadable music I hardly ever have reason to USE the drive. To add to our collective frustration, the students only had been able to afford one blank DVD and so had only the one copy. Unfortunately, I could not take it from them, and I had to leave it behind.

Despite my disappointment at not being able to see their work, the fact that they had experience shooting digital video was a great encouragement when I introduced the students to the Life in a Day project, which we posted about on our blog in July. My discussion with the students inspired some very interesting conversations about what one can film to give the world a sense of daily life for young people living inside a refugee camp. We also talked about different ways to protect participants’ identities and security, a critical issue when filming people who have fled political and ethnic persecution.

But once again, the many restrictions on people’s lives inside the refugee camp reared their heads. Despite our best efforts, DHL and Thai customs blocked the cameras from reaching me so that I could bring them to the students. While undoubtedly frustrating the experience also had a lot to teach me about the realities of life in the camp. Somehow, the much-vaunted services of the modern parcel delivery service I am so used to could not get the job done. It was as if the rules that we normally operate under did not apply, indeed I often found that was the case in the camp.

Finally, while with the students I took the opportunity to shared Dd’s recent good news. Very soon, we anticipate a Project Einstein to be connecting the students at LMTC to their Karen and American counterparts in Indianapolis where Emily will soon be preparing the US half of the digital penpal link-up.

Personally, I’m really looking forward to watching this exchange. In my time in Mae La I was constantly surprised by the resourcefulness of the people there. Though certainly deprived of many material things and extremely restricted in their ability to communicate with the outside world they found endless ways to reach out and learn about what’s happening beyond the boundaries of the camp.

An example that never failed to amuse me was arriving in camp on certain mornings and being asked by people there “Did you see the match last night?!” They were, of course, referring to the World Cup. From what I gathered they would find a friend or relative that had a TV and satellite hook-up, or perhaps a computer (all technically contraband in the camp) and crowd the set a dozen at a time. And so despite the obstacles they watched the games – watched them live – and were eager to discuss the relative merits of the German and Argentinean offenses or that blown call just before half-time. And while discussing sports may seem a trivial thing I found it extremely significant that people who are restricted to this small, remote corner of the globe find ways to stay connected, on their own terms, to the rest of the world.
There is no doubt in my mind that without technology like cell phones the camp residents’ insatiable interest in the outside world would never have been fulfilled (DHL clearly won’t do it for them). I believe that Project Einstein has the potential to be a transformative new tool for the students at LMTC and, ultimately, for the people of Mae La in general.

I should say, too, that I am excited to see all the things that the students in Mae La have to teach their American counterparts. The students in Indianapolis are in for an education the likes of which they have never imagined. Though as Americans they have access to all the information they could ever want, there is still much of the world they do not know and much they can learn from their fellow students in the refugee camp.

In the end, I left LMTC humbled. If ever I thought my own work was admirable, it seems small compared to the drive and commitment of these young people who, though refugees themselves, didn’t hesitate to face considerable dangers in order to help those less fortunate than they. I am proud to count them among Dd’s partners and I look forward to the day when their American colleagues in Project Einstein get to meet them. And when all of you can hear their stories and get a glimpse into their lives directly from them.