Since its inception, Digital Democracy has been fortunate to have the support, guidance and strategic vision of Abby Goldberg. Starting on our Advisory Board, and since 2010 working as a member of Dd’s core team, Abby has made a large impact on our identity and vision as an organization. Now, as she transitions out of day-to-day work at Digital Democracy, we remain grateful for all she has accomplished, and excited to see what good work she will do next.

Mark & I first met Abby through her work at the Global Justice Center, where she was organizing an international campaign for justice in Burma. Our collaboration began then – as Mark helped her produce a video advocating for global justice in Burma, and we connected her to contacts in New Delhi, who participated in the B8 worldwide day of action on 8-8-08.

Abby & I also bonded early on from our shared experiences in Cuba – she had studied abroad there, and I had traveled there as a youth journalist – and the lessons we had learned from the island, which defies stereotypes. We began collaborating on ideas of how to harness technology to promote dialogue & break down barriers between Americans and Cubans, and Abby worked with Dd more broadly to help us hone our vision and prioritize programming in our first year, signing on as one of the first members of our Advisory Board in early 2009.

From our early days as an organization, Abby has been someone who just gets it – who understands intuitively that the world is changing, and believes in the importance of harnessing digital technologies for social good. Her entrepreneurial spirit has also been an enormous asset, contributing to critical decisions as the organization has grown from an all-volunteer endeavor to applying for our own 501(c)3 this spring.

In 2010, Abby moved from our Advisory Board to our staff, working to develop program ideas for work in Latin America & the Caribbean and also honing her own skills and understanding of the tech space. Our work early in the year was heavily shaped by the devastating earthquake in Haiti. Because we had colleagues in Port-au-Prince at the time, the Digital Democracy team became involved in the Ushahidi Haiti response. As the response transitioned from the emergency phase to rebuilding, Abby played a critical role in shaping our Haiti work by recognizing the importance of working with Haitian women. After attending the Commission on the Status of Women in early March, Abby recognized how little women were being consulted as part of the redevelopment plan. As she examined this further, combined with the alarming rates of gender-based violence occurring in the camps, she worked on adapting Dd’s existing Handheld Human Rights program to address the needs of women in Haiti. 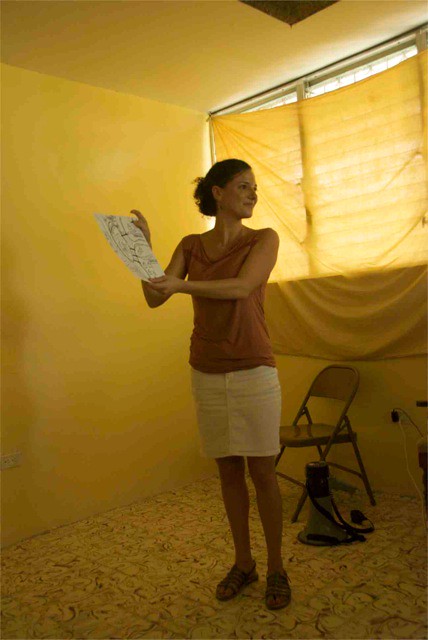 In multiple trips and trainings over the past year, Abby helped bring this vision to life. From our first photography training with Haitian women’s groups in April 2010 to election trainings in the fall and BarCamp Port-au-Prince in the spring, we’ve had many high points in our collaboration with Haitian women. One of the greatest came at the end of April, however, for the launch of the Jan Nou We L/The Way We See It photography collection at Splashlight Studios in Soho. Working in close collaboration with ELK Studios who curated the collection, Abby spearheaded benefit and steering committees, resulting in at least 350 visitors that evening, and more than $17,000 raised, proceeds of which are going to support our partner women’s organizations in Port-au-Prince.

Although this marks a transition, and Abby is no longer part of our day-to-day work, she remains an integral part of the Digital Democracy story, and we remain inspired by her vision & dedication to creating a positive impact in the world. Follow her on twitter or contact her via LinkedIn to follow her next endeavors.