I just returned from Vilnius, Lithuania where Secretary of State Hilary Clinton’s Innovation Team gathered over 100 people to discuss how technology can be used to further civic engagement.

Techcamp was a fantastic experience, bringing together 18 facilitators & experts from around the digital space (Twitter, Facebook, VOA, NGOs) & activists and NGOs from the Russian speaking world (70+ organizations from 15 countries). I was the only facilitator translating for myself, thanks to my Russian upbringing. and so of course I cracked jokes & bonded over stories about the unique qualities of different parts of the region. 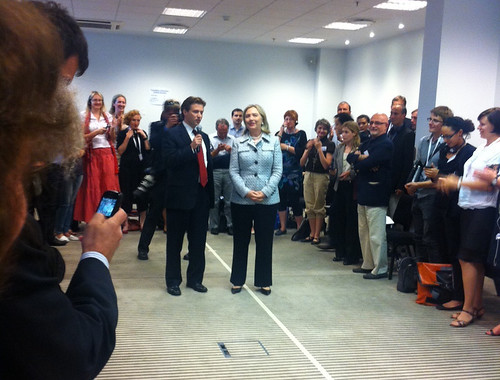 A lot of why I do the work I do at Digital Democracy is because I see technology transcending the opposition politics that people know all too well in the post-Soviet. People feel exploited by their leaders and lied to by their journalists. But this is a unique time where citizens can speak to citizens, based on a new era of transparency. There was a palpable energy as people tried to strategize on what this might look like in their country.

Much of the conversation was centered around the fact that governments are cracking down on protesters, using tools like Twitter and Facebook, to identify and stop them. It seems they’re learning the lessons of Egypt & Tunisia, and using the tools that were popularized in the media as fostering dissent.

Yet there was a lack of understanding how tools beyond social media can be harnessed to educate citizens and get them to participate in new ways. I showed a local transparency initiative from Georgia and spoke about a corruption monitoring system we’re developing in Macedonia. There was a lot of excitement.

My focus was discussing the future of mobiles and how the proliferation of them means exciting opportunities to engage. From FrontlineSMS to Geochat and more, getting messages into people’s pockets and purses never seems to stimulate people’s imagination.

"Democracy" is still often seen as protests and elections. It’s an exciting time to expand these definitions and stimulate the creativity of fantastic local NGOs to do so.

At the same time, it’s dangerous and complicated. 20 colleagues who were visiting from Belarus were detained at the border when they tried to reenter their home country. Literacy doesn’t exist in a void of safety.

TechCamp Vilnius is one of a series of TechCamps being held around the world. Check it out and see if one is coming your way.