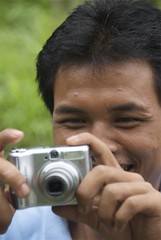 We’ve been working with Chin and Karen refugees in Indiana since spring 2008, and I’m excited to be working with schools in my hometown, where thousands of Burmese refugees have been resettled. Our goals for the project are three-fold:

a) Create a space for the Burmese youth and their classmates to share personal stories and forge new friendships,

b) Create a map of community resources – charted by the young people – that will be available for Burmese refugees as they are resettled into the new communities,

c) Spark community engagement by offering opportunities for community members to learn the stories of the refugees and discuss concepts of citizenship, freedom and democracy.

Too often, resettled refugees feel divided from their new communities. Indianapolis-based youth journalism program Y-Press has reported on the situation, quoting a young refugee who said "I don’t really hang out with American kids so much because they don’t seem to like us. I thought people would welcome us, talk to us, hang around and have tea."

We will be launching the project with two Indianapolis-area high schools in the fall. We are excited to facilitate the photography projects, connection with youth in Thailand and India, and community storytelling aspects of the program. We applaud the Clowes Fund for supporting the immigrant and refugee communities in Indianapolis, and are honored to be among their grantees.

About the foundation: The Clowes Fund is a family foundation established in 1952, in Indianapolis, Indiana. It makes grants in Indianapolis; Seattle, Washington; and northern New England to support human services, education and the arts. We are grateful for their support and excited to launch Project Einstein Indy!