Update, March 22, 2012: Three of the communities we’re working with for Equal Footing have been given verbal warnings of eviction from the Mexican authorities. We’re deploying a rapid response team to respond to this concerning turn of events. See our blog post on 3/22/12 for more information.

There is a different approach to projects between techies and filmmakers. Those in tech rapidly prototype and release ideas and applications, while the filmmaking community is much more prone to keeping a project under wraps until it has reached near-perfection.

I had the extreme pleasure of witnessing this creative conflict first hand when I attended the recent Bay Area Video Coalition (BAVC) Producers Institute on "indigenous science." The concept was ambitious: coupling documentary film projects with indigenous science from those communities. At Digital Democracy, we’ve been implementing grassroots empowerment projects of marginalized groups, including indigenous Mayans in Guatemala, but the opportunity to attach that work to film projects is an interesting expansion of the scope and reach for some of that work.

There’s a new level of interactivity that film affords and people are exploring what that new transmedia looks like. I interpret it as understanding how audience can be a fellow producer and not just consumer of media. Unfortunately I’ve only seen a few successful examples of this, such as Baratunde’s viewing parties around his "Future Of" TV show and the interactivity of Al-Jazeera’s new show "The Stream" (which I’ve guest hosted). At the public event, there were many discussions on how to blend new technologies into storytelling from an exciting group of mentors and pulled together by Wendy Levy. I discussed how mobile phones are a big part of this as we can now consider them an intregal part of our lives. They’re now our mobile homes as we live our lives out of them.

The group of participants were an exciting one:

My focus was on this last project on a team that consisted of director/producer Aaron Soto-Karlin, anthropologist Tim Trench and myself, with support from the BAVC mentors & staff:

Keepers of the Earth is a film following an indigenous Mexican man’s struggle to keep his traditions intact as environmentalists and armed revolutionaries try to exploit the rainforest that he calls home.  The technology piece comes in where he and his people are being zoned off of the land that they’ve lived on under the guise of protecting the rainforest. Digital tools can make this process more equitable as the local people have more chance to participate in the negotiations that will govern the region for generations.

"Equal footing" is meant to bring the indigenous people to the negotiating table with equal footing. With indigenous mapping and an interactive visual database, local groups can for the first time see the implications of the paperwork they’re signing off on by having it projected onto a map. Moreover, they can help redraw the borders according to their wishes and concerns. Having the digital available as printouts on paper and vice-versa can help overcome the current technology barriers. And partnering with the right NGOs who have been there for decades ensures a grassroots led process. 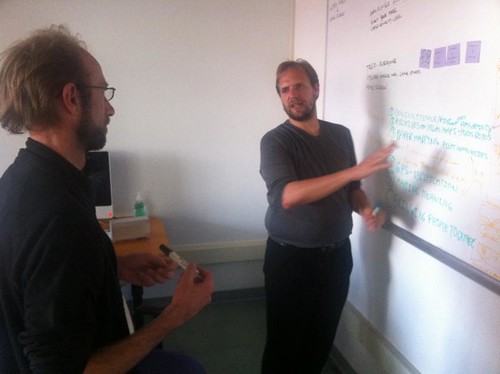 We installed a working prototype and the results were shocking. In our initial renderings of the government produced surveys, we immediately found that they had miscalculated the geo coordinates. This means that many more people were to be displaced than even they had intended. This initially proves that the tool can also be powerfully helpful to the government players as well.

As we continue to map what is written in the legal documents that have been signed and are now being renegotiated, there are hundreds more problems that might arise and force people from their lands. This project can help keep people on their land and save the rainforest at the same time. With such an important piece of land for global climate change, it’s necessary to make the proper decisions collectively. The dangers are too great.

Thanks to BAVC and best of luck to all the filmmakers as you cross the bridge between filmmaker perfection and techie agility.