Today we announce the launch of the only phone-based emergency response system dedicated to rape and sexual assault in Haiti. Together with our partners at  KOFAVIV, the Commission for Women Victims for Victims, we at Dd have designed, launched and tested the Call Center that is helping bring emergency care to victims in Port-Au-Prince. The KOFAVIV Call Center is supported by mobile-service providers Digicel and Voila, major phone providers in Haiti, where there is no 911 or similar system for reporting emergencies. Now, free calls to the number “572” connect victims to critical emergency care including medical, psychological and legal support.

The Call Center is one of four components of the [Dd commitment](http://www.clintonglobalinitiative.org/commitments/commitments_search.asp?id=694377 ) to the Clinton Global Initiative (CGI) to use technology to address rape and gender-based violence (sGBV) with women in Haiti. Dd and KOFAVIV are seeking $150,000 to support the Call Center and expand its reach throughout Port-Au-Prince, announced Dd at the CGI Annual meeting today.

“When we first started working with Haitian women leaders, there was no accurate information on the increasing rates of sexual violence in the tent-camps,” explains Emily Jacobi, our Executive Director. “The Call Center is a key component of an information management system we built with KOFAVIV to accurately capture data on the real scope of the problem, and get urgent preventative care to the most vulnerable cases.”

A recent report from Human Rights Watch observes that earthquake recovery has largely failed Haitian women and girls, noting, “Emergency contraception and other post-rape care is available in some health facilities, but many rape victims don’t have access to this care for the same reasons that women and girls have difficulty accessing other health services: they lack basic information about what is available and where, or they have difficulty paying for transportation to reach the services.”

Our partnership with KOFAVIV directly addresses this lack of information. Women who contact the Call Center receive urgent personal care, but the information collected also contributes to the macro-solutions for the problem. KOFAVIV collects data on cases and uses a system built by Dd to generate monthly reports, maps and data visualization to share with government and international bodies that provide critical security and lighting.

“The technology trainings that began in 2010 have brought about a major change in the capacity of grassroots women, particularly us, the women of KOFAVIV,” say Malya Appolon and Eramithe Delva, co-founders of KOFAVIV. “They have given us more confidence in ourselves, and have given us tools to help more people understand the reality of those living in the camps, a reality that gets harder everyday.”

KOFAVIV and Dd first partnered in April 2010, building a comprehensive system that uses technology to improve the fight against sGBV in Haiti. The partnership is the cornerstone of Dd’s commitment to CGI, promising to provide Haitian women’s groups the technical tools and training needed in their work to create a comprehensive approach to prevent rape in Haiti with a coalition of lawyers, health and psychosocial service providers, and strong networks of Haitian women and girls. 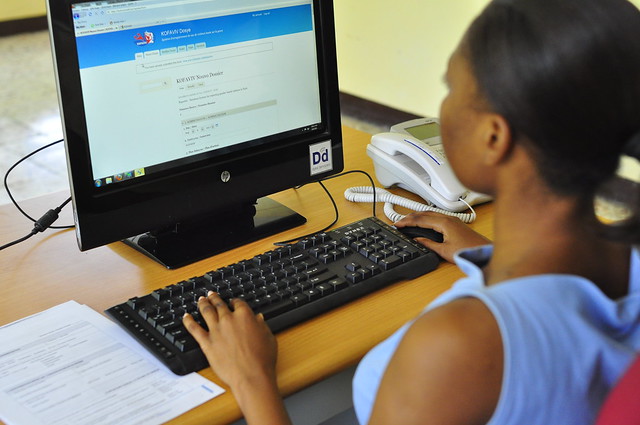 “572 not only provides support to victims, it represents urgent medical care. When a woman calls our number within 72 hours of an incident, we ensure she gets the medical care she needs to prevent transmission of disease, HIV/AIDS and unwanted pregnancy,” says Jocie Philistin, a Project Coordinator for KOFAVIV. “Medical support is the first step to receiving ongoing legal and psychological support.”

Through the first month of testing, the Call Center was promoted in 24 tent camps and communities by KOFAVIV’s network of 65 Community Outreach Agents, some police precincts and the General Hospital. Ready to accept calls from throughout Port-Au-Prince, the Call Center needs financial support to spread awareness across the city.