What does real-time mapping with NYC school kids look like? On Saturday, Digital Democracy was invited to work with 120 young people from all 5 boroughs as part of the Department of Education’s "Future Now" program. Having gone through the system myself, I jumped at the chance to help them innovate. While technology access is growing, so is censorship, and I worry about the education we’re giving kids when the banned website list resembles the one in Tunisia. Access to engaging curriculum is also key. One of the girls I taught was named "Tunisia" and when I made a crack about her being named after a country, she didn’t know what I was talking about.

But here in NYC, my task was to engage the kids in a conversation about what they’d like to see in the year 2020. Future Now is creating NYC’s Digital Storybook – a citywide youth  project about school, community, and  dreams. What better way to explore these themes than a mapping exercise  to literally add and remove items in their communities and on their streets. 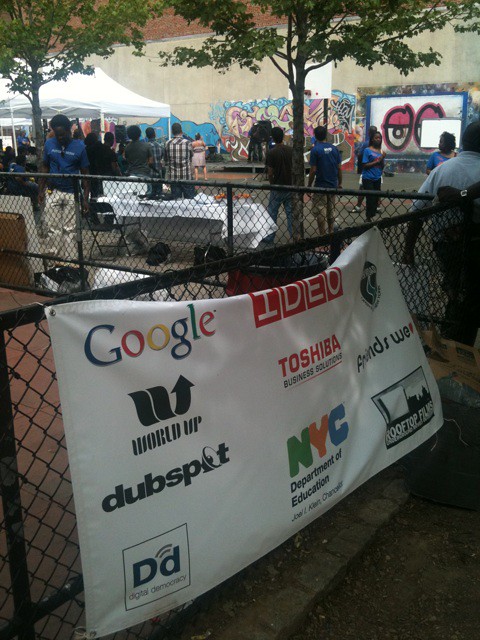 Every 25 minutes, a different set of students filters through, listens to a short presentation and gets their hands on 3 computers, kindly supplied by us and Tekserve. Using a modified Ushahidi mapping tool with data overlayed from the NYC Data Mine, to give a real-life example of how opening government data can impact the lives of everyday New Yorkers and lead to a smarter city. In this case, I overlayed "Bike Racks" and "Low-Bridges", as some of the only sets available in the Geo Data Catalog, but it proved effective. My example was built from bike racks, stating that in my vision of  the year 2020, gasoline would be expensive, the environment polluted, cars more scarce, and so encouraging the city to place a bike rack in front of my office would enable people to bike to work, making the city more peaceful, healthier and cleaner. Plus, if the government thought a bike rack existed where one didn’t, I could let them know about their error.

To make it personal, I then asked them what they would do if they knew how much money their school was getting compared to the neighboring school. Not only did that set off a flurry of ideas from the students, but the teachers got pretty excited as well. You can visit the website or see it embedded below to see their ideas. Of course their private information remains private.

Digital democracy has engaged with participatory collaborative learning around the world, and each context reveals new insights for culturally-specific programming. Our scavenger hunt model allows for a natural progression to the conversation and working in groups helps to ensnare the attention of more distractable youth.

"OMG kids are on Facebook!" is one of my favorite challenges. Two skateboarders had finished mapping the perfect place for a skatepark in their community ahead of the other students and got distracted, finding themselves wandering the internet. Instead of telling them to go back to our site, I told them that no other students had added a photo to their posting so could they find the best photo to go along with their post, to make it easier for a politician to see exactly what they had in mind. The hunt was on, and they indeed found a great photo, without another distraction. I keep reiterating that this is a key aspect to the model of 21st century education – information management. Can students find information that is going to add value to their post. Do they know whether it’s creative commons and how publicly it can be used. There are still many steps before getting to that point, but this is a start.

A few real problems did pop up. School in a park, Open Road Park to be exact, is beautiful, but makes it hard to work with too much tech. The one good projector was taken by the Google Team, which meant improvising on the fly. The bigger problem though, was spell-check. When students were entering in their main body of information, a line would show up automatically under misspelled words. Every time students would backtrack and try to figure out the right spelling. This happened so often that I estimate it took about twice the time to create each entry as it otherwise would have. In the places where there was no spell-check, like in the titles, the entries are littered with bad spelling. 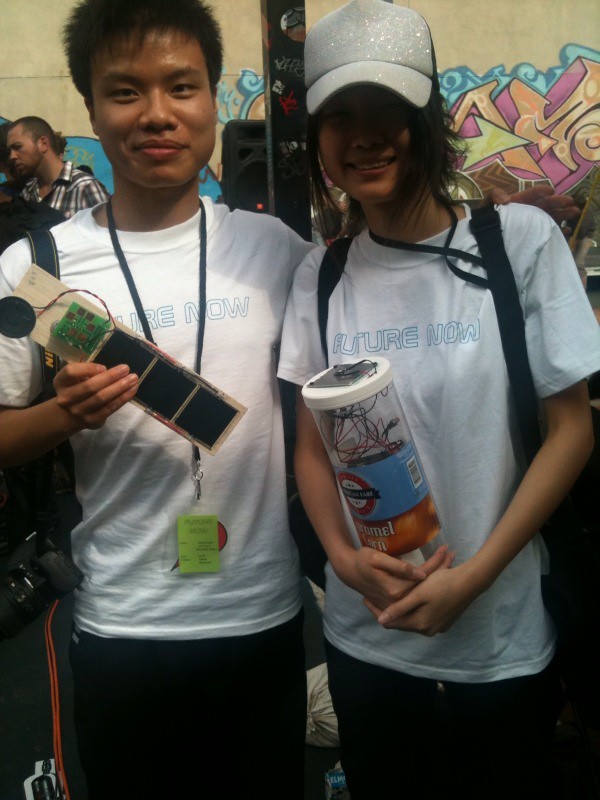 Our work confronts language problems head on, mainly working with visual media such as maps, photos, videos, etc that can allow people to connect beyond these barriers. It’s important to consider language barriers even with native English speakers as well. And in NYC, it’s even more complicated, with our students on Saturday being from places as varied as Tibet, Thailand, Congo, Madagascar and Brooklyn.

At the end of all the trainings with us World Up, Google, IDEO, friends we love, Toshiba, each student group was part of a performance. step, musical theatre, mapping, graffiti, gardening, accapella, and cheerleading. My favorite (I know I’m not supposed to say that), was the group showing off their solar panel creations. Their English wasn’t very good, as half were newly from Japan, but their tech was amazing. They hack solar panels into all sorts of things, whether a portable charger for the 3rd world, a flashlight, or a musical instrument that sounds like an electronic kazoo. "It’s very efficiency!" exclaimed one of the leaders of the project.

The diversity of skills, backgrounds and ideas reminds me how much I love this city. I just hope that we stop censoring it and start supporting more of these kinds of initiatives for a better future.

Thanks to the Department of Education and everyone who came together to make this possible, to Humanity in Action, Pioneers and Andrew Rasiej for the development of similar project connecting schools in Amsterdam and NYC called Open My City, to DJ Moni for letting us know about Future Now and to Jerri Chou for dropping the LES by to check us out.