Violence is closely correlated to elections in the minds of many voters in young democracies. With elections and democracy correlated as well, there’s a dangerous chance that people will draw causation between violence and democracy.

We launched Ethiopia Vote Report with a local partner in Ethiopia knowing that the turnout would be low. The project was entirely a volunteer effort and without the resources to secure the system and train people in how to use it in a dangerous and complicated place like Ethiopia would have been foolish. Nevertheless, we were able to have an application translated in Amharic and a number of first hand reports that otherwise might not have made it to the English language. 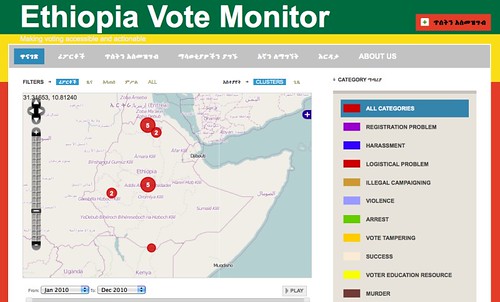 Our goal is to redefine what democracy can mean to people by facilitating an understanding of civic engagement. In the lead up to election day, this means a campaign to teach people what their relationship is to government and how they themselves can start to make it better. Educating citizens in the use of free tools is key to supporting individual freedoms. Tools such as mapping, blogging, media production, and search creates a powerful infrastructure that supports transparency and accountability, and prevents violence.

While this system only received 15 reports, on election day itself, it was visited 62 times. I’m confident that number is part of an exponential rise in the number of people who actually heard the message contained within those reports.

Without any large-scale deployments of citizen monitoring of elections, it’s impossible to know the true benefit or impact. But I’m confident that as people around the world begin to see these kinds of projects deployed in their own countries and in their own languages, it will begin to redefine the very concept of democracy and help to inspire new forms of citizen engagement.