What are the similarities between open source software and a Hawaiian shirt?

I recently traveled to Erbil, Iraq with Digital Democracy Advisor, and Director of Tech Innovation for the NY State Senate, Noel Hidalgo for the Emerging Technologies/Emerging Democracies IREX and Institute for War and Peace Reporting hosted Iraq E-Media conference. To break through the myth in Iraq that expensive technology is better than free nd open source software, we had Noel explain that working in the New York State government, on Wall Street, in New York City, he does not have to wear a suit and that he is judged by the substance of his work, not his Hawaiian garb, and the same is true with technology. Tools need to be judged on their merits. Time and time again, open source ones are proving to be in the lead. Noel is open source in a Hawaiian shirt.

The audience gave rousing applause to his remarks. This was in Erbil, Iraq. It brought together over 150 media, civil society, and government representatives discussed e-governance, access to information, internet freedom, and the role of media and civil society in protecting and promoting Internet freedom..

"Talking about ‘open source’ is [in Iraq] complicated," I was quoted in an article on TechPresident. "Everything is [considered] free and open source here, because everything is pirated… One of my favorite bloggers in Iraq, and a trainee, Hamzoz, didn’t want to wait for [the free browser] Firefox to download so he bought a copy on the street for a dollar."

Discussing open source with Aumed Ahmed, the IREX tech guru, over dinner the first night he described some open source “horror stories” about perceptions and free software in his work in Iraq. "I try to teach Open Office but business people want Microsoft Office. They know it is expensive so they thinking it’s better." He tries to explain to his students that this one provides better security and that it has basically the same functionality, but with even more features like local language support.

Localization and security are the two aspects of open source tools that the people we spoke with were most interested in. Using these subjects to frame the rest of the discussion of tools was very helpful. When the existing frame of reference to technology is proprietary solutions, it’s important to figure out what can stimulate a healthy conversation to break through that mold and to get people more interested in the open source alternatives. Once people hear that they can translate programs into Arabic or Kurdish, they get excited. When they learn about the security gaps that arise from their pirated versions of software, then it ignites them to engage more. However, this is once they learn that programs are pirated in the first place.

Locals who studied computer programming and engineering were educated on proprietary Microsoft systems. As such, those who have worked on web applications in the past have done so on a .NET framework. While not interoperable with open source products, the skillset is a useful one when teaching similar concepts in different languages. For instance, teaching local coders how to build on a LAMP [Linux (operating system), Apache HTTP Server, MySQL (database software) and PHP/Perl/Python] stack proved easier than expected. As the principal components to build a viable general purpose web server, this is an important skill to have, given that it’s widely applicable. However, the programmers we worked with have generally shown more pessimism when confronted with the opportunity to develop their own web applications. This could be for many different reasons, from not having advanced enough skills, not being given the opportunity to do so in the past, or needing additional training. With more training and education, their existing skills can be built upon to incorporate more current standards. An additional benefit of being tied to these standards is having help from the resources produced in large developer communities in them from around the world. 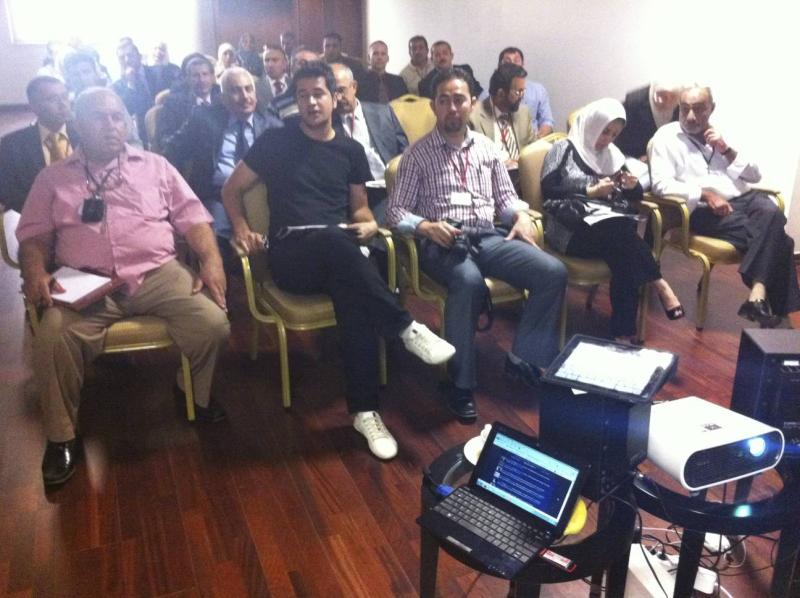 Iraq still faces an uphill battle in building a digital infrastructure, a digitally savvy government, civil society and technology industry. Developing programs that embrace open source and entrench open culture is a promising alternative to a bleak reality of sectarianism and stagnate government. There is no better time to act than now. If IREX can help facilitate a community of developers who are translating content and applications into Arab and Kurdish, these tools can have a positive impact across the region.

If the continuing transition to democracy can utilize open technology that embraces participation, transparency, and efficiency, then the operating system of the citizen will be open and democratic. This is a key theme to continue to track and explore as the project evolves and develops. The alternative is reverting to an entrenched hierarchical power structure that reestablishes itself with new leaders. There are echos of this power structure in the e-governance plan unveiled by the Ministry of Science and Technology (MOST). It stipulated efficiency, transparency and accountability, not participation, as its core principles.

Speaking with Ministers and lawyers working on new Iraqi legal statutes, we brought up the case of a friend of Digital Democracy, Chiranuch Premchaiporn of Thai Netizen Network was arrested in Thailand. In Thailand, the publisher is responsible for content, not the writer, meaning that websites like Facebook are liable for anything written, not its users. We’re now working with key decision makers to ensure that the same structure does not exist in Iraq.

We also helped the business sector to incorporate crucial rights issues by working with the telecoms to establish the Iraq Telecoms and IT Industry Association (IATA). We helped to craft the consumer protections and ensure that their services are being accessed to the greatest extent possible. We spent a lot of time working through the bylaws, to ensure proper representation from business and civil society. We fought detractors in the group to make sure that the rights of young people and developers were included. Our concerns were addressed and the bylaws now allow for more mentorship and youth-driven innovation in ICT. Measures for environmental and public health were also tweaked in positive manners, and matters of security and privacy starting to be addressed. 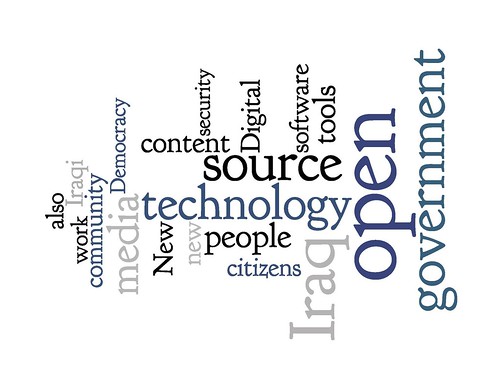 Our goal is to find and nurture existing open source communities in order to utilize ICT as the post-conflict tool to prevent further violence and encourage collaborative democratic space. Eben Moglen, professor of law and legal history at Columbia University and founder, Director-Counsel and Chairman of Software Freedom Law Center, points out that free software is a fundamental requirement for a democratic and free society in which we are surrounded by and dependent upon technical devices. Only if controlling these devices is open to all via free software, can we balance power equally. Our belief is also that one can not have an open society with closed source software. While open source isn’t inherently democratic, there is more of an option to use it well and with more benevolence, thus impacting society. What is the return on investment on sharing? This is part of our monitoring and evaluation research, showing a new model for development.

Core to the government 2.0 community is a focus on determining the return on investment (ROI) of open-source tools for citizens and for societies. As the Obama administration and other countries begin to pursue these strategies within the government and as groups build their own tools, there has been strong evidence to show positive effects.Countries that have preexisting infrastructure, while having a greater opportunity for innovation, also have entrenched solutions that are difficult to work around. Some technology companies sign 10-year contracts, making new solutions impossible, if not irrelevant.

In Iraq there is the potential to lay the groundwork of local open source jobs by working with the government and business sectors, while educating the local population in these skills. It’s in the interest of the government 2.0 community and the greater open source movement to ensure that these efforts are successful, and there has already developed a growing buzz on the subject. Of course, progress that’s made here has implications for the region that will also benefit from more Arab, Kurdish, and other open-source developers. The inverse is also true, where innovations in Lebanon and Jordan will start benefiting Iraq.

However, in a country that still doesn’t have credit cards, there are serious limits as to what can be done. But facilitating a way to get over those hurdles means a collaborative method that will lead to the mutual benefit of all those involved. 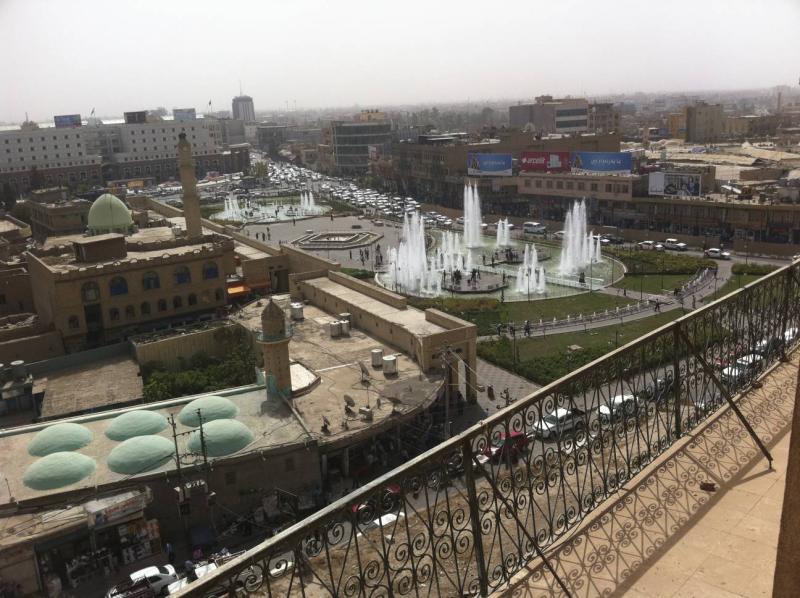 Check out our presentations on slideshare: