Video is changing as more and more people have the ability to be creators. This provides unlimited potential for new ideas and methods in video, a prospect that is exciting to me as someone who works daily in the fields of old and new media.

Last weekend the Open Video Conference hosted by FIT brought together an eclectic and inspiring group of leaders from the fields of business, activism, education, and art to talk about the present and future of online video. The conference’s topics ranged from the latest technological advances with html5 (new tech that’s helping creators re-imagine media for computers and mobile phones), the past year’s video memes and what made them so incredibly popular, to new open source tools in education, and the impact and security issues associated with the growing ubiquity of cameras and human rights video. The 2nd day of the Conference focused on the latter two topics, tools for education and human rights video, and it was this day of the program that interested me particularly given the focus of Dd’s programs on new media literacy, and the production of our online interactive TV series DdTv.

The day’s opening keynote by Mike Wesch, a cultural anthropologist, was an inspiring way to start the day, a magnetic speaker, Wesch spoke about the exchange between teacher and classroom, and how video and the internet can change a classroom from a lecture-based atmosphere into an exchange of ideas, a means of engaging students in ways not done in the past. He closed by saying that "the best teachers are the ones who learn along with their students", and I couldn’t agree more, especially as we continue to develop our Project Einstein curriculum, using photography, video and mapping to create conversation and collaboration in the classroom and online. The panel on education provided further inspiration, including the introduction of some new open source platforms being developed which integrate video archives in the classroom. Open Vault – WGBH’s media library and archives – enables students to search the thousands of archived video, cut out specific clips from this video and annotate these clips. Mediathread from Columbia’s Center for New Media Teaching and Learning, using Open Vault, takes it a step further, enabling students to create project pages using this archived video while also bringing in a discussion board, a newsfeed showing updates to these pages, and the ability to bring in material from Youtube and Flickr. What an amazing way to revisit historical records while also re-inventing them. It’s great to see the creation of these open source platforms, projects that could potentially be very useful as we continue to develop and launch Project Einstein in Indianapolis high schools this fall. 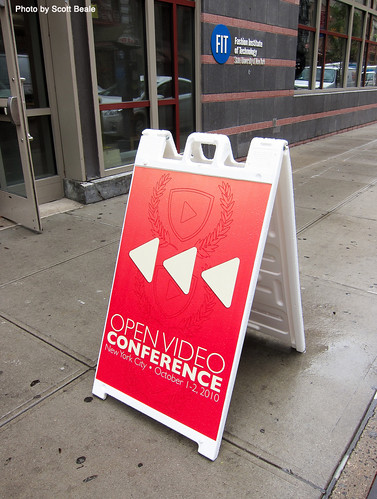 The afternoon’s focus on human rights video began with a panel focused on the ability for people around the world to use video due to the growing availbility of mobile phones with video capabilities as well as other inexpensive devices. This topic is particularly relevant to Dd, as our series DdTv is filmed entirely with mobile phones and flip cameras, and this inexpensive, small, and easy-to-use equipment enables ease of filming, access, and security on the ground as we’re launching our programming. The panel lead into a workshop, Building Solutions for Human Rights Video, of which I was one of the featured speakers. One of the issues that arose dealt with the safety and security of those filming and of the subjects in video, and so it was important for me, while speaking, to highlight the specific challenges Dd faces as we work with video and work to build trust with our partners and their communities around the world. Of course, building trust is one of the most important elements when working with a new community, and it’s also extremely important to give the people and organizations we work with the opportunity to tell their often inspiring personal stories and have these stories viewed online in a public forum by individuals around the world, but in a way that does not compromise their own safety.

Sam Gregory, Program Director of Witness highlighted the issue of ethical responsibility that one has when filming, to not, through this filming, re-violate a person (who’s potentially been a victim of a human rights abuse) by failing to get the consent of the subject. This point is crucial to filming human rights video, and hits home with me as an issue that we confront head-on in the field. Whether it’s women who have been a victims of gender-based violence in Haiti, or former political prisoners from Burma, both of these subjects and people have been highlighted as part of DdTv episodes, and both groups are working with us as we develop programming that enables them to report abuses similar to those of which they’ve been victims. It’s important to make sure that those being interviewed and filmed know exactly where that video will be shown and in what context. When we film, we make sure it’s clear to each person that we film what we’re doing and what it will be used for – and ultimately the relationship between our team and our subjects makes for more compelling interviews and more powerful viewing experience, and also, and importantly does not have a negative effect on the programming that we’re building within these communities. When possible, we also screen the videos that we have produced for the communities that we’ve filmed, and in doing so, this increases the transparency of our organization for our partners.

If these precautions had not been taken then the risk of hurting the subject due to lack of information about the distribution of the content could be potentially dangerous, and reverse any positive results that could come from the video. In a conference setting like OVC, with hundreds of people looking on, and many that are making video of all kinds, it’s particularly important to highlight these issues, to spread awareness throughout the community of people contributing to the constantly expanding presence of video online. As video technologies are constantly changing it’s exciting that people have the ability and inspiration to highlight the issues facing their own communities through this medium, and equally important for those of us who have and continue to work with video, and know these risks, to educate people about the security issues that go hand-in-hand.