It’s an exciting week for Digital Democracy. One of our key Haitian partners is in New York, and we’re attending two conferences. Mark is in Budapest attending Google’s Internet at Liberty 2010 conference. I’m in NY, representing Digital Democracy at the Clinton Global Initiative (CGI) annual meeting. 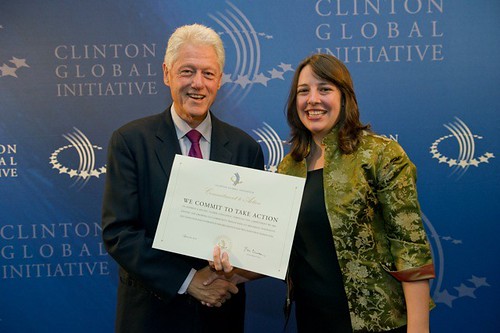 CGI is built around commitments – every single attendee has to make a commitment to action. Our commitment this year is focused on our work with women and girls in Haiti. Over the next two years we have committed to train at least 100 women and girls in how to use new technologies to address gender-based violence, and establish a call center to provide services to hundreds of women who face violence in the displaced person’s camps in Port-au-Prince.

It is fitting that our commitment will be in the spotlight this week, as this past week, we have been hosting our partner – Eramithe Delva – and have had the pleasure of speaking with her to the Women Donors Network, UN Foundation, NYU Law, State Department and more.

Eramithe is a courageous advocate for Haitian women’s rights. Responding to her rape and her husband’s murder in 1994, she co-founded KOFAVIV (Commission of Women Victims for Victims) to organize fellow poor women raped during the military dictatorship. She has organized thousands of women over the past 15 years.

Since the earthquake, Eramithe has lost her home and, because of her work against the growing epidemic of gender-based violence, even her place in a tent-camp. This is her first visit to the United States, where she has been meeting with women philanthropists, US government representatives, students, and NGO partners.

Eramithe & her colleagues truly represent the frontlines of the struggle against gender-based violence in Haiti. We hope this week to raise her profile and the support we need to fully support her efforts.