_This article was written by Emily Jacobi and first appeared in theHuffington Poston 2/23/12. Read it here: http://www.huffingtonpost.com/emily-jacobi/burma-myanmar-technology_b_1291110.html_

Once again, a global record was shattered in Myanmar/Burma.

This time, the record wasn’t for the largest number of child soldiers (designated by Human Rights Watch in 2002), the world’s longest-running civil conflict, or the jailing of dissidents. Instead, this month organizers in the largest city, Yangon, broke the record for the largest number of attendees at a BarCamp, a type of user-generated technology conference that has been hosted all over the world. Not only did more than 5,000 people attend the tech convening, the opening address was made by Nobel Peace Prize Laureate and opposition leader Aung San Suu Kyi, known affectionately as "the Lady." 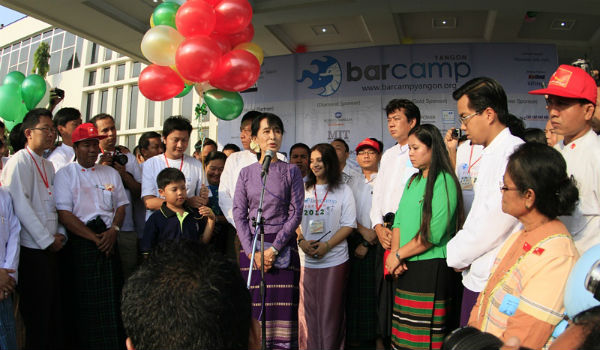 Barcamps, which have been hosted everywhere from Orlando, Florida to Harare, Zimbabwe, normally range from 100 to 600 attendees. Democratic in nature, BarCamps are usually convened by an organizing committee, but the full agenda and content of sessions is decided by participants once the event begins. BarCamps have inspired further types of "unconferences" including CrisisCamps to respond to events such as recent earthquakes in Haiti and Japan. Amongst international BarCampers, BarCamp Yangon has taken on a legendary status for its record-breaking attendance — three years ago, BarCamp debuted in Yangon with close to 3,000 attendees.

The success of BarCamp Yangon is all the more surprising given that it emerges from a country better known for resembling Orwell’s 1984 rather than the Silicon Valley of Southeast Asia. Ruled by a military dictatorship for five decades, even the name of the country — Myanmar or Burma, depending who you ask — is highly politicized. However, Suu Kyi’s surprise appearance at BarCamp comes on the heels of a general opening of the country, marked by a nominal transition from military to civilian government in fall 2010, Suu Kyi’s release from house arrest a year ago, Secretary Clinton’s visit to the country last December and the release of 651 detainees (including many political prisoners) in January.

I was in Yangon in fall 2009, two years following the military’s violent crackdown on peaceful protesters known as the Saffron Uprising. The current changes in the country seemed unthinkable at the time — elections loomed on the horizon but few people seemed hopeful. Aung San Suu Kyi had been under house arrest for close to 15 years, and media was still tightly controlled. Yet, looking closely, I saw glimmers of the change that was to come. Internet cafes had proliferated around the city, filled with young people. The price of sim cards for mobile phones had recently dropped from $2,000 U.S. to $20. Walking downtown, illegal satellite dishes were visible across the rooftops of buildings, and in teashops I’d scour the weekly Internet Journal for words I recognized. Standing in angular roman letters beside circular Burmese script, words like "Twitter" and "Facebook" appeared frequently in articles even though both sites were officially blocked in the country at the time.

In Yangon that fall, my friend Mark and I met with technologists and bloggers who had been pushing for technological innovation in their country, despite the slow download speeds and weak mobile network. Prior attempts to organize gatherings of bloggers had failed, but in the concept of BarCamp, they saw a possibility. Mark and I connected them to BarCamp organizers in Bangkok, who had been evangelizing the format in cities across Southeast Asia, from Ho Chi Min City to Kuala Lampur. Brainstorming how to get permission to hold a BarCamp in a country where unofficial gatherings of more than 5 people were illegal, the Burmese techies decided to focus on the importance of developing the country’s technical skills and supporting the business community. Four months after our initial meeting, the organizing committee pulled it off, and the first BarCamp Yangon was hosted on January 23-24, 2010.

Held annually, BarCamp Yangon has become a fixture of the Burmese tech community, an incubator for young software developers, bloggers and budding entrepreneurs. This year, topics covered at BarCamp included Augmented Reality, Mobile Government, Applying Agile Practices and even poetry. However the idea of opening BarCamp with an address by an opposition politician would have been unthinkable even a few months ago. In the current context of the country’s opening economic and political situation, it was a cause for celebration, and 1500 balloons were released following Aung San Suu Kyi’s address.

Standing in front of the Myanmar Info Tech building where BarCamp was held, Suu Kyi addressed the crowd of attendees, connecting the work of the BarCamp participants to the broader political developments in the country. She urged attendees to consider how to "use technology for the world to be better, for humans to be better, and for citizens to become better."

Speaking to the user-generated nature of BarCamp, where any participant can propose and lead a session, Suu Kyi cited an eastern proverb — "When one candle lights another candle, the first candle’s light doesn’t dim." She went on to explain "Just like that, when you share your knowledge, the knowledge of others increases, but your knowledge doesn’t become less. When we share, our world becomes brighter. Knowledge is light. So, use the technology as the candle light to make a better world."

In a country emerging from 49 years of military leadership, where university courses were often canceled in times of political unrest and where the educational system itself is top-down and autocratic, BarCamp’s emphasis on drawing out the inherent talents and knowledge of each participant might seem radical, but perhaps is just what the country needs as it transitions — sometimes slowly and fitfully — to a democracy.