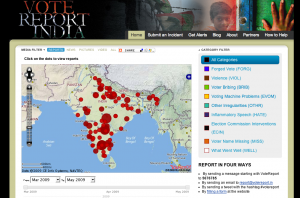 India is the world’s biggest democracy. There are roughly 700 million people eligible to vote in the current parliamentary elections. The votes of these 700 million people are being contested by 6,719 candidates vying for 543 representative seats. Monitoring this massive democratic undertaking are various regional, national and international bodies keeping a watch on irregularities and violations of the electoral code. There is now an exciting new addition to this array of watchdogs: Vote Report India.

Vote Report India is a web platform that collects information about voting or electoral irregularities directly from voters through SMS (text messages), twitter, emails or web reports and then displays those reports on a live, interactive map. The visualization of the data is made possible by one of Dd’s partners, Ushahidi, whose revolutionary engine was originally developed to crowdsource and map information about violence in the wake of the Kenyan presidential election in early 2008.

We’re excited to highlight Vote Report India, and share the news about their work with our other partners and the Indian community organizations with whom we work. This innovative and democratic approach to election monitoring empowers citizens to protect their right to participate in the political process and hold government and individuals accountable to that right.

Learn more about Vote Report India and the additional partners who make this work possible, on their site.