"Sisi ni Amani" means "We Are Peace" in Swahili. Our innovation was to use mapping to support existing peace leaders by connecting them, instead of bringing in new peace programs. Our hope was to give community members the information to connect with peace activities near them. We joined Digital Democracy and launched in Kenya. Now, having left Digital Democracy to pursue a more permanent local structure and a new program of activities, we want to share with Digidem’s supporters what we have accomplished and learned over the past seven months in Kenya. 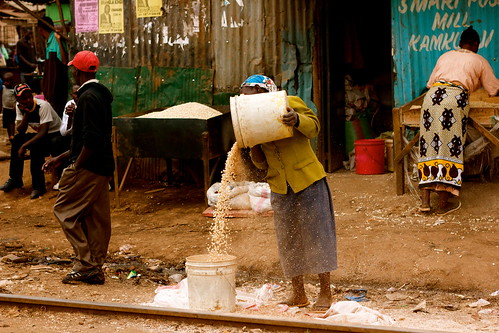 We arrived in Kenya last July along with then-Media Manager Tegan Bukowski and started our peace photography workshops to understand local definitions of peace, modeled on the Project Einstein curriculum. The Kibera photo project workshop produced some incredible work by our young participants. Tegan Bukowski, who led the workshops, has done incredible work in the past months to create a book of the childrens’ photography and to organize an exhibition of their work. Looking forward, we are excited to see the work of these youth gain its well-deserved audience!

In early September, the Sisi ni Amani team decided that, based on what it had learned, it would need to take a community-by-community approach to outreach for mapping peace projects. We began in Baba Dogo, a slum in Eastlands, Nairobi, which experienced widespread violence in 2007 and 2008 around and after elections. Our main contact in Baba Dogo arranged for a group of community groups to meet and plan an outreach strategy, leading to our community launch event. Based on the ideas of, and with full participation from, ten community groups, our launch consisted of a peace procession, with over 100 individuals marching wearing Sisi ni Amani t-shirts, plus drummers, singers, and dancers. The procession stopped in each of Baba Dogo’s nine cells to let people know about our phone number, and flyers and stickers were distributed throughout the procession.

The day culminated with a peace concert for which performers donated their time and talent, and which was attended by upwards of 400 community members. The day was a bright and colorful success in terms of getting the community to mobilize around the theme of peace. 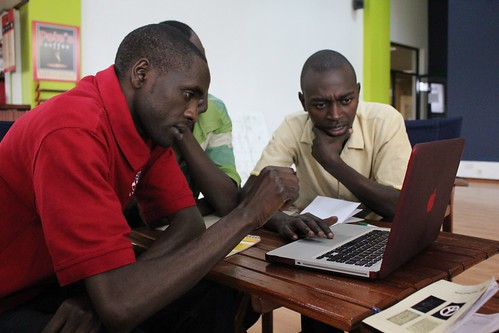 After the launch, we worked with the local groups to designate a temporary leadership structure, which then planned a team-building picnic for members of peace groups from both Baba Dogo and the neighboring Korogocho slum. The picnic included team-building exercises and discussion about how to mobilize the represented youth groups towards accomplishing the mission of Sisi ni Amani. The team then decided to make a launch in Korogocho, and this launch took place at the end of November. Again, the launch included participation of ten community groups from Korogocho, and consisted of a peace procession as well as a concert.

Major lessons learned from these two community launches include the importance of managing expectations of participants in programs. Despite us making the fact of our (very) limited resources clear to the group, the sheer fact that we were funding a major launch and came from the U.S. created very high expectations of future funding and personal benefit from many individuals who participated in the launches but were not more deeply involved. We learned the importance of not only being clear with words, but also making clear with actions (such as giving the group a budget to come up with an event instead of inviting them to share their ideas and then figuring out what our budget could accommodate) would be important for planning such community events in the future.

Asking people to send mobile SMS about peace events or groups was often confusing to the community, and the fact that there was no clear or immediate benefit or even effect on the individuals texting in prevented them from participating. In addition, the lack of internet access as well as the fact that most groups in the community do know who and where each other are, but are nonetheless not working together, made the map useful for reporters and less useful for the community in terms of increasing coordination and collaboration between groups, or increasing community awareness of existing peace programs. This does not mean that peace mapping cannot be useful – only that a different approach may be needed, and that it may be more useful for the media and for creating peace heroes and coverage of peace in the country than for the groups themselves. 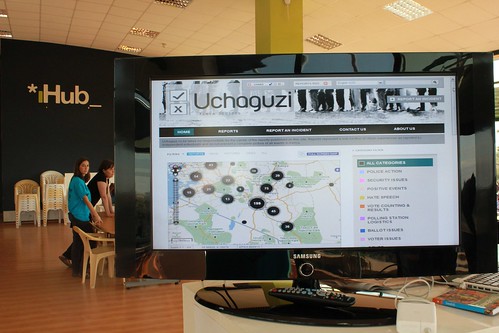 Ahead of Kenya’s vote on a constitutional referendum on August 4, 2010, we worked with the Ushahidi team on Uchaguzi, an effort to map information during the event. For us it was an opportunity to help map to encourage peace and prevent violence. This was the second attempt to give Kenya a new constitution. The first was in 2005, and the motion was defeated. It has been noted that the failure to adopt a constitution was one of the causes of the post election violence in 2008 that killed thousands, displaced 300,000 and affected all Kenyans. Cody and I taught volunteers how to use the system while Tegan and other Ushahidi techies did some troubleshooting.

After almost seven months of activity on the ground, we are pursuing a new avenue to support peace work in Kenya. In mid-January, the team officially left Digital Democracy and has incorporated as a new organization in Kenya, dedicated to supporting existing peace work in Kenya through the use of open-source technologies. While continuing to bring on Kenyan volunteers and staff, we are presently focusing on SMS communications, and giving community peace leaders the ability to rapidly and effectively communicate with one another and their communities via SMS. We believe that our approach has huge potential to support and enhance peace work in our target communities in Kenya, and to create a long-term presence in Kenya.

We will be taking new and innovative approaches to our work in upcoming years leading up to the 2012 presidential elections, and the lessons we learned in our attempts at creating a mapping-based project will certainly serve us well. We invite you to follow us at Sisi ni Amani Kenya at sisiniamani.org. As we move forward with Sisi ni Amani Kenya, we wish to express our sincere gratitude for the team at Digital Democracy for their support of us and of our work over the past months. We learned a great deal under their guidance and are grateful for the support and insight they brought to our venture at its outset.

Stay tuned for my chapter on peacemapping in the the forthcoming book, for which Dd’s Emily Jacobi has also written a chapeter:Mobile Technologies for Conflict Management: New Avenues for Online Dispute Resolution,ed. Marta Poble.