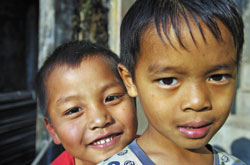 Our article "Year of the Rats" was published in this week’s NUVO, an independent Indianapolis newspaper (“Indy’s Alternative Voice”).  In it we document the disturbing famine that looms over the Northwest Burmese State of Arakan and the neighboring Indian state of Mizoram.  The famine is the consequence of a 50-year cycle of bamboo forests blossoming and the boom in the rat population that comes with it.  We learned about the building crisis while conducting research with Burmese migrants living in Mizoram.  The famine threatens the lives and livelihoods of hundreds of thousands of people and the border region’s stability.  This article is released just in time for the World Refugee Day event we’re hosting, coming up on June 20th. Read the article here.