What is the connection between media and peacebuilding? This is the question being tackled at the upcoming "Seizing the Moment" summit being put on by the United States Institute of Peace and the Independent Television Service, in collaboration with Sesame Workshop. I’m proud to announce that Digital Democracy is an online partner for this event.

Tune in live for the webcast on May 12, 2010 from 9:30am to 3:30pm (Eastern) entitled "Seizing the Moment: Media & Peacebuilding." This summit will consider specific recommendations on ways to harness the power of media for conflict prevention. It will bring together senior media makers and policymakers including Jared Cohen, Riz Khan, and Rebecca MacKinnon. The online audience will be able to engage panelists through a live chat and Twitter discussion (hashtag: #magd). We encourage you to take part!

For me, the power of media runs deep. Some years ago I ran a film festival in Tblisi, Georgia as a peacebuilding initiative for people from Azerbaijan and Armenia, as well as those from separatist regions of Georgia. Filmmakers saw countries that they were otherwise barred from and began speaking with people from those countries for the first time. As time went on, friendships grew and negative stereotypes fade away. 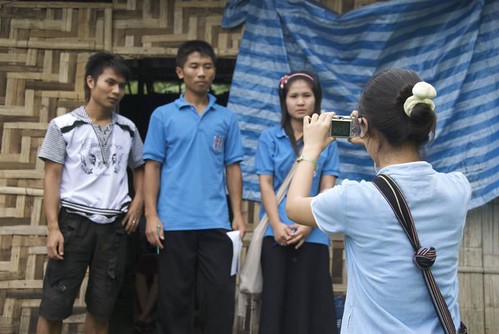 The work that we do with Digital Democracy TV very much comes from the same ethic. We try to highlight the incredible stories told by the brave people we work with around the world, who are often challenging norms or otherwise defending the rights and integrity of human beings. Bridging these gaps, allowing people to relate to one another, allows for a new kind of diplomacy and helps to inform our own communities that much more

It’s crucial for youth to develop these skills. They’re becoming increasingly able to create media, but in order for it to be beneficial, they need to really understand it. We’ve been building a participatory learning curriculum for new media literacy. We just got some support to connect youth with resettled Karen refugees in Indiana using the Project Roebling platform we’re building with MIT and Eyebeam in Drupal. There’s also work from an orphanage in South Africa and the first batch of youth in Bangladesh. Project Einstein Thailand – a photo training with youth in the Mae La Refugee Camp. You can view photos and videos we filmed and broadcast live on the web.

This kind of an education project can lay the foundations for future crisis response by having the maps and photographs created by youth as part of their education. We realized this, unfortunately, when we had a team on the ground in Haiti doing a media training with youth and the earthquake hit. Thankfully we were able to utilize http://haiti.ushahidi.com/ to respond in the immediate term. Now we’re looking to build on the system even further for violence prevention and peace. Two of my colleagues evolved this into a media training in Haiti as we develop a system for technology on prevention of women and gender-based violence.

We’ll be exploring this in even more detail with Sisi Ni Amani (We Are Peace), our peacemapping program in Kenya. Starting this summer, we’ll be raising awareness of peace efforts within Kenya by mapping peace initiatives across all segments of Kenyan society. Sisi ni Amani seeks to connect previously disconnected agents to empower this arm of civil society before Kenya’s 2012 presidential election.