Last month the Waorani hit the headlines due to a landmark win against the Ecuadorian Government. Sixteen Waorani communities contested the supposed consultation that the government carried out in 2012 before putting millions of hectares of rainforest up for sale as part of new oil concessions, covering the lands of seven different indigenous peoples in the Southern Ecuadorian Amazon. The consultation process, the Waorani argued, was riddled with failures of procedure: lack of translations to local languages; not enough time given to convene people who have to travel for days by foot and canoe to reach meeting locations; overly technical language; rushed meetings and a lack of understanding of their relationship to the forest and the impacts that petrol activities would have on their lives.

The judge, during her five hour ruling, gave examples of how the government had failed, again and again, to understand the context that the Waorani live within; failed to understand their ancestral and spiritual relationship to territory and invoked language and terminology that was incompatible with their worldviews and cosmology. In short she systematically showed how the consultation had been neither properly free, prior, nor informed, as required by law, and that it contravened international indigenous rights conventions and declarations subscribed to by the Ecuadorian Constitution. 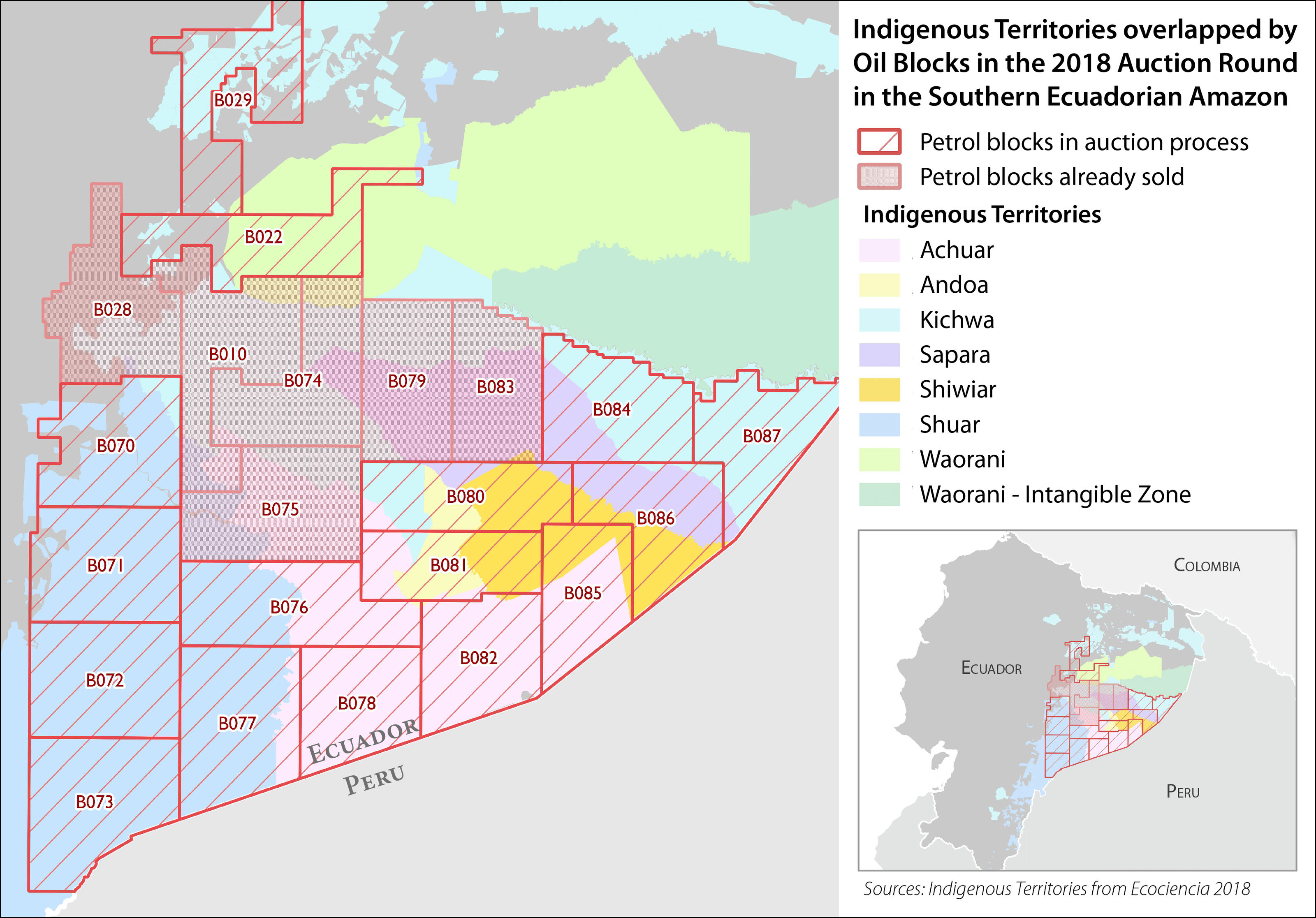 As you may have read in previous blog entries, for the past four years Dd has been working with Alianza Ceibo, Amazon Frontlines to support Waorani communities making maps through a participatory process. These maps played a critical role in the legal case. They were used to demonstrate context and situation, locating the communities within the vast Ecuadorian Amazon and showing the overlap with Block 22, the particular oil block whose sale the Waorani are fighting. The maps were also used to demonstrate the profound environmental, social, cultural, historical and spiritual knoweldges which are embedded in the Waorani’s relationship to territory: the sacred waterfalls and fishing spots whose water would be contaminated by oil and toxic run-offs, the burial sites and petroglyph covered caves at risk of being turned into drilling platforms, the ancient groves of peach-palm their ancestors planted that could be felled to level ground for airstrips and the mineral deposits where all the jungle animals congregate, which would be abandoned.

We asked María Espinosa, the Waorani’s lawyer from Amazon Frontlines, about the role that the maps played in the process. She explained: 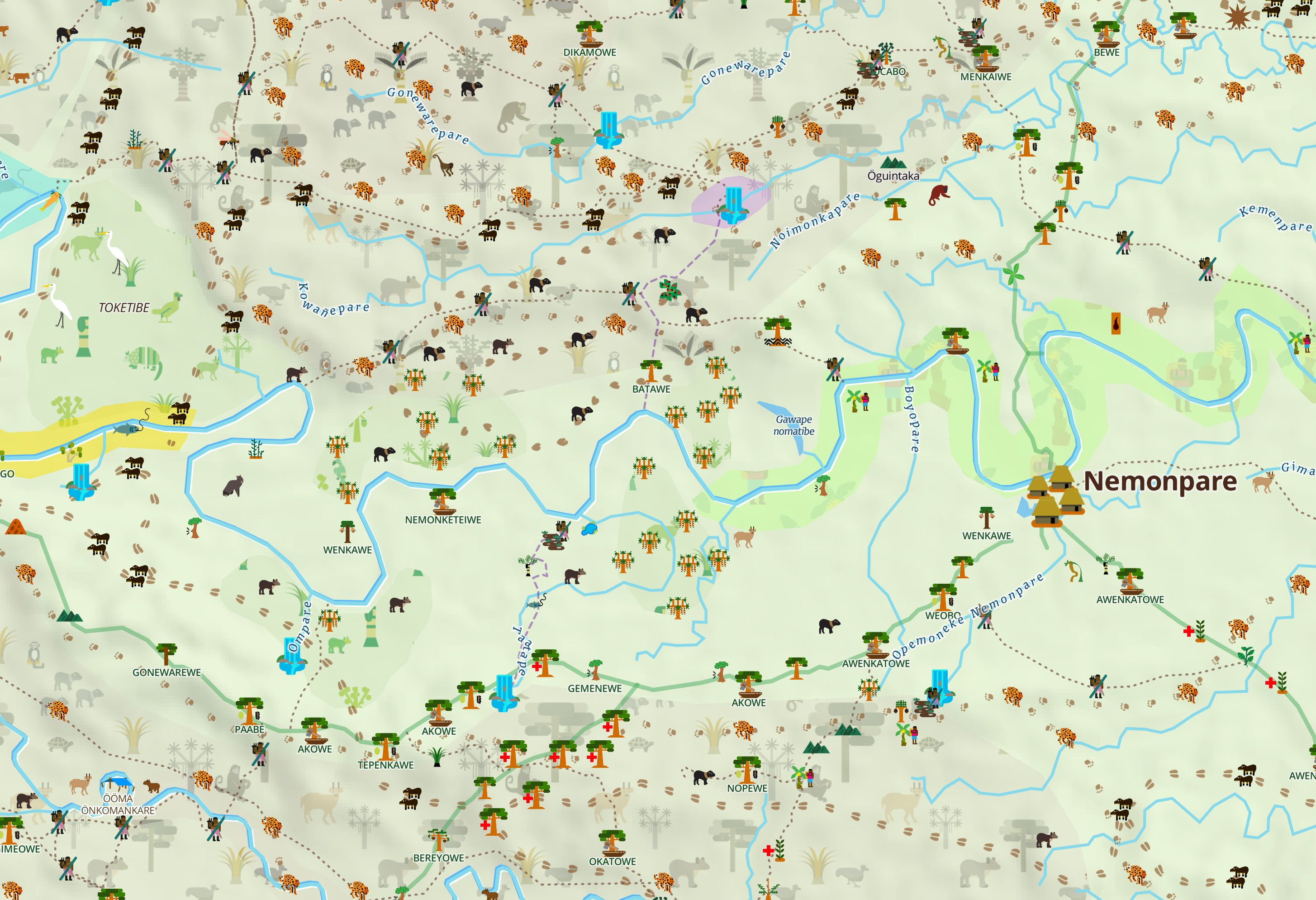 “The maps were fundamental in helping the court to understand the Waorani’s notion of land: a living territory, the space in which they develop as Waorani beings, and which they depend on to give them life and subsistence. And the maps also helped the court realise that the imagined lines generated by the State when it creates petrol and other resource blocks, are just that, imaginary, and have no reality for the indigenous communities.”

The Waorani’s win is an important precedent for upholding the rights of indigenous people to free, prior and informed consent, and many other indigenous people who experienced similar consultation processes, are joining forces with the Waorani.

The government is appealing the ruling and the Waorani will have to prove their case all over again, to new judges. Indeed the Waorani are also considering appealing one aspect of the ruling which stated that four communities, whose main village sites lie outside Block 22, are not valid participants in the suit as their land is not affected. However ancestral territory, as the maps show, does not stop at the edge of the village, it is a seamless tapestry where cosmoscape and landscape merge, where history, biodiversity and living culture are entwined, and extends far into the forest to hunting and fishing spots, as well as sacred sites and other places of importance. 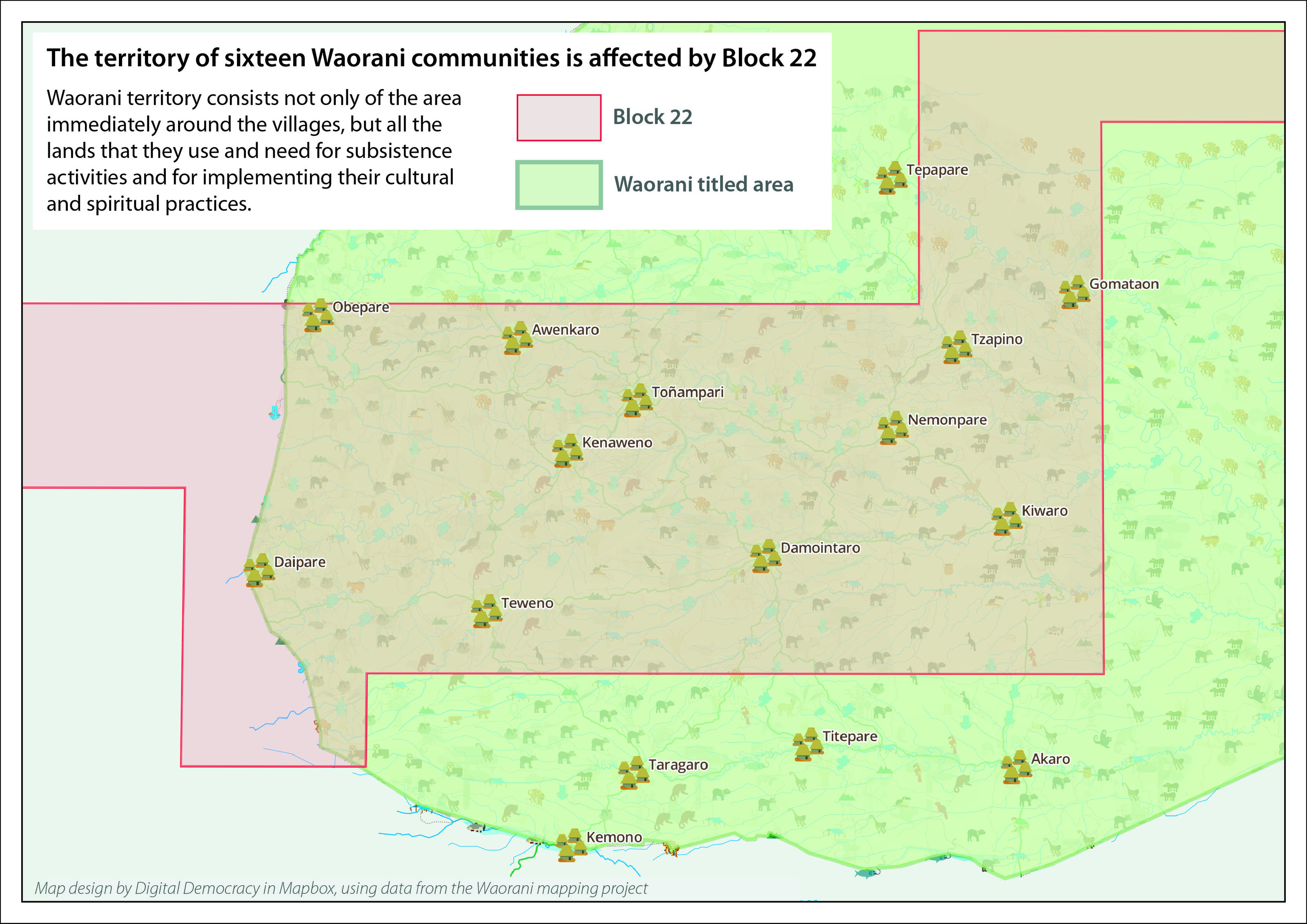 About the role of maps in the legal case, Oswando Nenquimo, Director of the Waorani Mapping Project (pictured below using the maps in court) said:

We included our printed territory map as part of the documentation for our legal case, because it shows how important, biodiverse and fragile our land is and that it isn’t an empty space, but known, loved and cared for by the Waorani people over many generations. 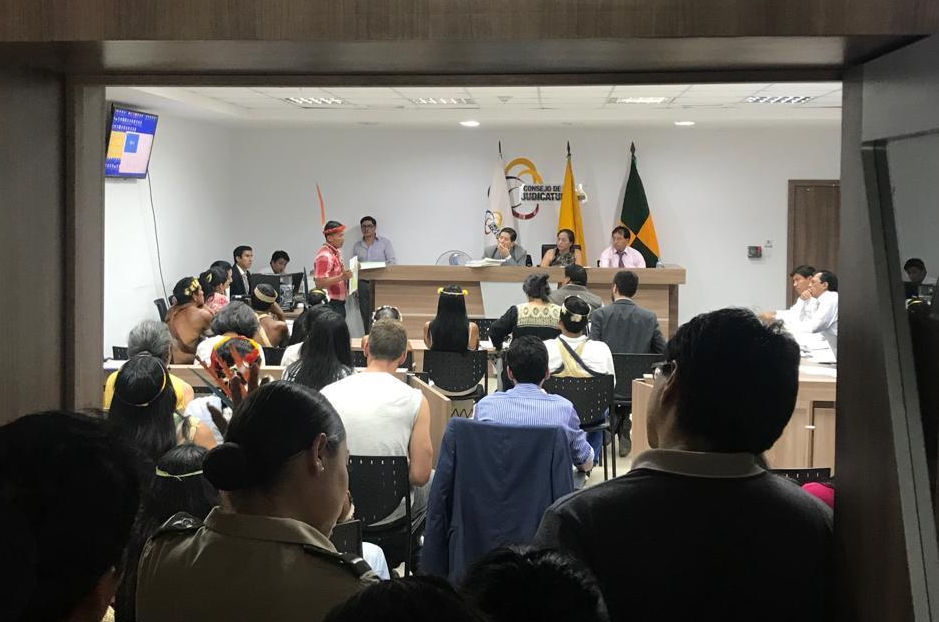 For the Waorani, the work of the maps does not stop here. This year they began a process of gathering testimonies to tell richer territorial stories, and use the maps to think more about their future as a people and the kind of sustainability they want to engage in, given their rejection of state promoted models of development.

Supporting the Waorani’s territory mapping project over the last three years has been a highlight of my work with Digital Democracy. Serendipitously I was able to be with them when they presented the legal case in February, and when the sentence was given on 26th April, both times accompanied by hundreds of Waorani and other indigenous people. It has been a privilege to work with them and to witness how their maps being used to effect in court, as well as how the mapping process contributed to building solidarity between villages, so important to maintaining their position of strength and unity. Fittingly, the Waorani continue to be critical partners for us in the codevelopment of Mapeo, a tool we hope can be used by indigenous and other frontline communities the world over to address human rights and environmental violations.

If you are interested in the technical workings of Mapeo, all our development is happening in the open on GitHub where you can follow along and, if you have time and the skills, jump into the issues and help us fix some things.