Today we had the pleasure of hosting five journalists from Indonesia at the Digital Democracy office. Although none of us on staff speak Indonesian and none of their English was particularly strong, we managed to communicate through 2 translators who had a portable translator toolkit that connected the group via wired headsets. While it looked a bit funny, it certainly was a huge help and allowed us to get into a fascinating conversation ranging from similarities between their country and Thailand, to the meaning of democracy. 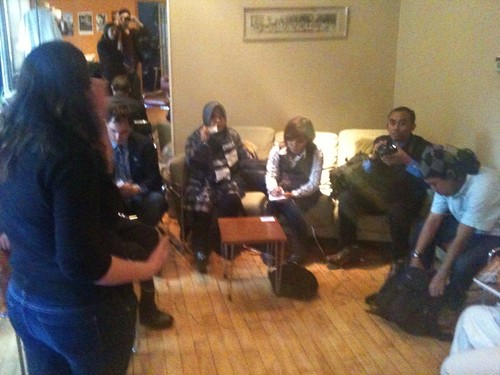 Not long into the conversation, Kristianto expressed that in Indonesia, citizen journalism is very lively but it’s the demonstrations that are a lot harder. A recent incident of accusations of malpractice against a hospital brought support from millions online but when it came to taking to the streets, only 8000 or so came out. We spoke a bit about all of our conceptions of activism, the role of information and the changing tides of "action" in a digital state.

Another concern was that in East Java, some Islamic organizations ban Facebook saying that it is against the religion and sometimes it goes so far as people being arrested for posting illegal material on the site, under libel laws. Part of a 21st century journalist’s toolbelt is not only knowing what sites exist that can help spread information, but also the consequences of harsher punishments. If information isn’t in a public forum, the conversations will often continue, but in a more dangerous space.

The conversation took a shift to the complications of working with different legal structures and the always important question of verification. Having just seen the Prachatai episode of DdTv, Herry mentioned that it seemed to him our philosophy was similar to a quote from Prachatai Editor Jiew, that "democracy is not the answer. It’s the path to find something." It was exciting to hear him say that and really opened up a lively discussion on the continuing problem that many in Indonesia view US culture as either " American Idol" or "Iraq War" and see much less of the innovation, creativity and community-led media that we were talking about.

Muhlis then chimed in that, "It seems ideology is no longer important. It’s about communicating and helping people and help themselves." I couldn’t agree more.

Excitingly, it turns out that Kristianto is also the principal of a high school of 300 students in Lampung, who just received news yesterday that they will be getting an internet connection. He says that he wants the students to learn about the kind of democracy we’d been discussing. Hopefully we’ll be able to connect with him on that. I promised to bring bagels. 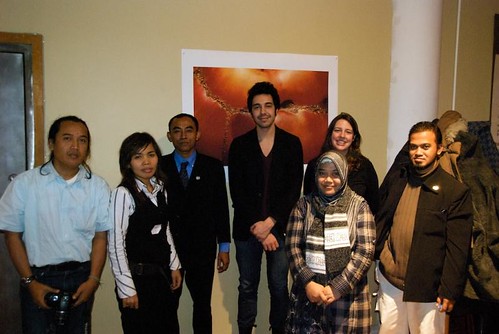