Port-au-Prince, Haiti: Starting March 8, 2013 the KOFAVIV Gender-based Violence Call Center received nearly 2000 calls over the course of a mere 48 hours. Thankfully, the influx of calls was not a result of a spike in violence in Haiti, but rather a response to a campaign launched by Digicel in honor of International Women’s Day.

The campaign shared information on the 572 Call Center with over 5 million mobile subscribers in Haiti.

During the month of March, call center operators fielded thousands of calls from throughout the country. Calls came both from women seeking support for specific cases of domestic and sexual violence and from citizens asking for general information on what the call center does and to do if an incident of violence ever does happen to them or those around them.

For our partner KOFAVIV, the promotion from Digicel was a major victory in their efforts to support survivors of sexual violence throughout the country. According to Wismide, one of the call center operators, “Even if callers aren’t victims at the time of the call, we hope they will remember 572 as a resource and share it with people close to them. The more people are informed about what to do, the more support survivors will have in their communities in the future.”

Calls in Context: Current Rates of Sexual Violence in PaP 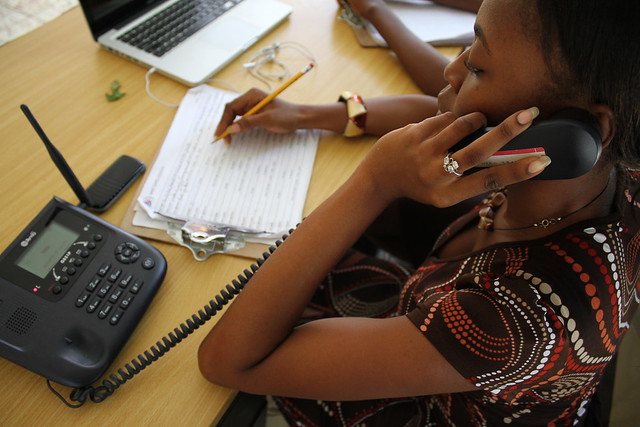 KOFAVIV and other women’s organizations continue to be alarmed by the steady rates of sexual violence in and around Port-au-Prince. In the first 3 months of 2013 alone, KOFAVIV has documented 110 incidents. But despite the consistent influx of cases, community agents have noted some positive changes as a result of ongoing awareness-raising campaigns like this one. As Fania, one of the KOFAVIV Technology Agents, shared:

“It used to be the norm to stay in silence if you had been raped and even attempt to take your own life. This is still a common thing but little by little we are seeing that more women are reaching out and seeking help. Many already know to get to the hospital immediately. Even if they do it without telling anyone in their household, they know they have to get medical care to protect themselves.”

A Critical Moment for the Call Center

Throughout the past months, KOFAVIV has found ample support for promotion of the call center number including organizational community outreach, Digicel’s campaign and a direct link from the Red Cross general info hotline – 733. But three years after the earthquake, women’s groups have struggled to find ongoing funding for the basic services the call center was designed to connect women to. Explained KOFAVIV co-founder Eramithe Delva, “Everyone is interested in data but we can’t forget that the call center has been successful because it is a way to connect women to the care they need. If we no longer have support for lawyers or social workers, where are we going to direct women when they call?”

While Dd’s partnership with KOFAVIV has focused on the technology and design of the call center and database, the success of these tools has relied on the strength of KOFAVIV’s core program: Organizing with survivors of sexual violence, providing psycho-social support, accompanying women and girlsto legal and medical services, and documenting the details of their cases.

In February, Dd worked with KOFAVIV, ESIH & other partners to host Haiti’s first Hackathon, where Haitian and international developers collaborated with KOFAVIV’s tech and call center agents to design a web-based map application so that KOFAVIV can more easily serve callers from across the country. The Hackathon represented the end of the direct implementation phase of our work to address GBV in Haiti. We have since focused on reporting on our work and supporting KOFAVIV’s full management of the technical systems we build together. Moving forward, Dd is continuing to work with KOFAVIV to spread the word about 572, focus on strategic use of data for prevention and stressing the urgent need to continue funding medical, legal, psychosocial services.