Still_reeling from the earthquake nine months ago and with elections later this month, what do Haitians living in the camps think about voting and the opportunities for changing their country? Last week, my colleagues Emily Jacobi, Emilie Reiser (aka "les deux Emilies"), and I traveled there to find out. Conducting a week-long training with our partners resulted in another profound week of learning, sharing, and exchange.

With the support of the U.S. Institute for Peace (USIP), Dd came to Haiti to help some 50 women representing grassroots women’s groups in Port Au Prince work more effectively for greater political and social rights in the lead up to national elections on November 28th. This training followed up on two previous trainings this year, in April and July respectively, during which Dd staff worked with Haitian women to use mobile phones, video, and photography to increase their access to political power and rights.  The focus of Dd’s work in Haiti has been to expand on the women’s understanding of and ability to use new communications and digital media tools to share their voice and report on their realities, this time, with a particular focus on Haitian democracy and the upcoming elections. As a part of this work, we sought to identify early warning indicators of election-related violence and how to report these findings to those who need to know.  Women from the camps – the women we are working with – have the most incentive to combat violence and protect themselves and their loved ones. Women are the most attuned to, most affected by, and most motivated to stop violence in their communities. They also possess critical and unique information that can save lives.

As a lawyer from our partner organization, the Bureau des Avocats Internationaux (BAI) commented during a meeting this week: "Haiti is a country built on social exclusion.” No group knows this more than Haitian women, who represent a mere 4% of seats in their parliament and only 10% of land-owners. When we asked the women participants about democracy, they eloquently explained how it is a concept foreign to their daily reality.  To put it in their words:
We don’t have democracy.We vote for leaders who don’t protect us, who commit violence against us and our children, and use us to deepen their pockets.We have no food, no water, no homes, no education, no security, and no respect for our rights.Animals live better than we do.They are spending money to get elected, and we still live in tents.
The training began with a group exercise in which women formed small groups and drew maps of their communities.  In total, eight maps of different parts of Port Au Prince were drawn and presented to the room by each group.  All eight maps contained some of the same information, despite having been developed separately by each group.  Most depicted garbage, latrines, and violence in the camps.  One group, with four of the youngest participants, drew the route from their home to KOFAVIV’s office – where we held the trainings. The map began with a school and when asked why the school was the largest object drawn, they responded that it was the “most important” and the thing “we want the most, so we drew it that way.” 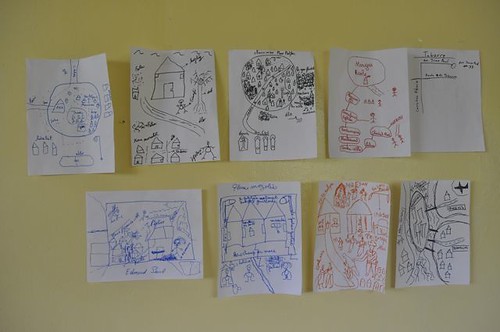 After each group presented, I presented a map of my home: New York.  I drew the five boroughs, the East River and the Hudson, and the airport in Queens. I shared where Dd staff lives, where the Dd office is, and other information about NYC. Needless to say, my map differed significantly from the others taped to the wall. The women’s questions were illuminating: they asked me “are the rivers dangerous?”  “Is there violence in New York like there is in Haiti?”  One can only imagine the impossibility of fathoming a place like NYC, a place so unlike anything or anywhere they know.

Following the mapping exercise, we switched modes to political participation, exploring their definitions of democracy and their views on the upcoming elections. Less than a month away from Haiti’s highly contentious elections, we did not know exactly what to expect in terms of views on this election and Haitian democracy in general, but anticipated great skepticism.  Haiti has struggled since it became a “democracy” more than 20 years ago to respond to the needs of its people.  Furthermore, the one time Haitians came out in droves to elect a representative leader, he was soon ousted by a military coup that left the country torn apart and people feeling disillusioned and powerless.  But regardless of whether Haiti can be called a “democracy” in reality, as well as name, we knew that women’s voices matter, their opinions are a necessary part of the overall dialogue, about this election, and all of the decisions affecting their lives.

We followed this up with a discussion of other ways to leverage power and push for changes. We discussed who funds the Haitian elections  – foreign countries including the U.S., EU and Japan – and how if the Haitian government doesn’t respond to the needs of Haitian women, their voices can still help to convince those supporting the process to take a different approach and/or pressure the Haitian government to make changes to better ensure the rights of its citizens in the democratic process. This led into a presentation of citizen reporting on elections in various countries around the world and how technology has enabled citizens to have a greater voice, and thus greater power, in affecting national politics and policies.

Another topic of discussion was barriers for women to meaningful participation in these elections, which turned into a series of group presentations on “reasons why we are not going to vote.” These reasons included, but were not limited to: still living in tents while politicians are “getting out the vote,” never having seen change by leaders they have voted for in the past, and most pervasive, concerns about security. 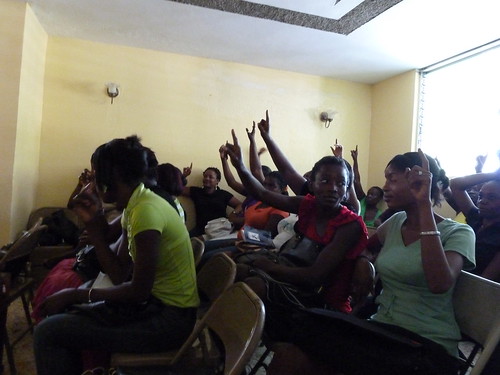 One woman told us the story of having gone out to march to commemorate the anniversary of the founding of her organization, KONAMAVID, which was broadcast this fall on national television.  She said that since that day, she hasn’t slept in the same place two nights in a row because she has been receiving calls threatening her life.  If she received death threats for expressing her views and celebrating the work of her organization that day, one could only imagine the fear this woman and her colleagues feel when standing up for their rights publicly. We responded by talking about how technology can enable women to “march” virtually, anonymously, and more securely.

To this end, we brought together the discussions of democracy and meaningful participation in the political process with technology and the various mapping exercises we began our week with.  We introduced the ways in which citizens have used communications tools such as video, photography, phone calls, sms, and the internet to report on elections around the world and increase transparency and knowledge of realities on the ground.  We invited colleagues from Solutions, a Haitian technology company that oversees the noula.ht platform for mapping citizen reports in Haiti, to present the platform and how women can use it to safely report on violence and other injustices in their communities.  One of the presenters, Naomi, who is an operator who receives calls for Noula engaged the women by telling stories of threats she’s received, and doing mock calls with participants to orient them to how to report an incident by calling the 177 shortcode in Haiti. 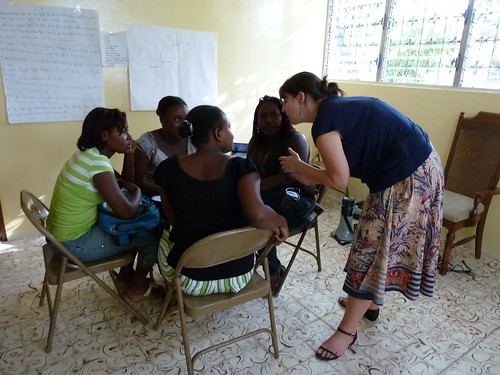 We ended the training on Thursday with a day of smaller meetings with groups formed by dividing Port-au-Prince geographically into five loose neighborhoods where the women live. Each group took out a camera on Wednesday afternoon to aid their documentation, and on Thursday each individual reported on their homework – a case of injustice as well as a piece of news about the elections. While some cases were more general, many women came back with specific cases that had happened to their neighbors, families or themselves, such as the woman who had been beaten for her mobile phone, or a pregnant woman who was being refuges treatment. In reporting on injustice, one women from Cité-Soleil (a slum area of Port-au-Prince) had witnessed three cases of rape Wednesday night, and her colleague, also from Cité-Soleil, reported on election-related intimidation & harassment she had seen in her neighborhood that very morning, when a man had threatened to rip a candidate’s shirt off of a woman because he supported another candidate, who paid for his allegiance.

Last week, women participants of our training signed up to be “community agents” – a title they chose – who will come to the KOFAVIV office each week and work with Digital Democracy to report on early warning indicators of election violence as well as other problems facing their communities.  Dd’s Emilie Reiser will be staying on the ground and working with our partners to provide ongoing support over the next five weeks. She will be sharing regular updates on our findings and joint work and supporting the women’s ability to share their own reports as well as video and photographs.  Stay tuned…

You can support Digital Democracy’s work in Haiti helping women to report gender-based violence, by visiting our site.