To mark the the one year anniversary of Digital Democracy, we’re launching Little Brother vs. Big Brother, a campaign to translate Cory Doctorow‘s compelling book Little Brother into four Burmese languages. By translating and distributing electronic versions of the book to Burmese readers, we hope to broaden the debate on using technology in the struggle for freedom against tyranny. 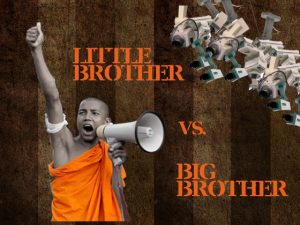 Little Brothertells the inspiring story of a group of courageous teens who take on Big Brother using technology to challenge an authoritarian regime. In September 2007 Burma/Myanmar, monks took to the streets in non-violent protest, using technologies – cell phones and digital cameras – as a means of documenting these protests, the world witnessed the extraordinary power of technology for enabling the flow of information, and as a way for so many citizens to express their struggle living in the country. As these technologies become increasingly available, it is vital that Burmese readers gain knowledge that will enable them to use the technologies they have most effectively.

The funds raised for the campaign will support Burmese activists living in Thailand, India and Bangladesh who will be translating the book into Burmese, Karen, Chin, and Rohingya.

Our campaign will continue through December 15th. Please visit the site today and pledge your support!